The medicinal mushroom Ganoderma lucidum (Reishi) was tested as a potential therapeutic for Inflammatory Breast Cancer (IBC) using in vivo and in vitro IBC models. IBC is a lethal and aggressive form of breast cancer that manifests itself without a typical tumor mass. Studies show that IBC tissue biopsies overexpress E-cadherin and the eukaryotic initiation factor 4GI (eIF4GI), two proteins that are partially responsible for the unique pathological properties of this disease. IBC is treated with a multimodal approach that includes non-targeted systemic chemotherapy, surgery, and radiation. Because of its non-toxic and selective anti-cancer activity, medicinal mushroom extracts have received attention for their use in cancer therapy. Our previous studies demonstrate these selective anti-cancer effects of Reishi, where IBC cell viability and invasion, as well as the expression of key IBC molecules, including eIF4G is compromised. Thus, herein we define the mechanistic effects of Reishi focusing on the phosphoinositide-3-kinase (PI3K)/AKT/mammalian target of rapamycin (mTOR) pathway, a regulator of cell survival and growth. The present study demonstrates that Reishi treated IBC SUM-149 cells have reduced expression of mTOR downstream effectors at early treatment times, as we observe reduced eIF4G levels coupled with increased levels of eIF4E bound to 4E-BP, with consequential protein synthesis reduction. Severe combined immunodeficient mice injected with IBC cells treated with Reishi for 13 weeks show reduced tumor growth and weight by ∼50%, and Reishi treated tumors showed reduced expression of E-cadherin, mTOR, eIF4G, and p70S6K, and activity of extracellular regulated kinase (ERK1/2). Our results provide evidence that Reishi suppresses protein synthesis and tumor growth by affecting survival and proliferative signaling pathways that act on translation, suggesting that Reishi is a potential natural therapeutic for breast and other cancers.

Inflammatory breast cancer (IBC) is a rare, aggressive and lethal type of breast cancer that particularly involves hyper-activation of protein synthesis pathways. In IBC, cancer cells block dermal lymphatics of the breast causing an inflammatory phenotype. IBC lethality derives from generation of tumor emboli, which are non-adherent cell clusters that rapidly spread into the dermal lymphatics by a form of continuous invasion known as passive metastasis. Despite improvements in survival and outcomes for breast cancer generally over the last 20 years, patients with IBC continue to have a poorer prognosis with 5-year survival rates of 50% , whereas the average comparable rates for patients with non-inflammatory breast cancers are 70% to 80%. Standard IBC treatment involves non-targeted chemotherapy or a combination of several agents including radiation therapy, hormonal therapy and surgery. The systemic treatment utilized to treat IBC causes generalized destructive effects affecting both cancerous and non-cancerous cells, thus new therapeutic strategies are highly desirable to improve the prognoses of women with inflammatory carcinoma.

Ganoderma lucidum, also known as Reishi, is a traditional Chinese medicinal mushroom that has been used for centuries in East Asia to treat a variety of diseases, such as immunological disorders, inflammation and cancer [2]. The effectiveness of Reishi has been attributed to either the polysaccharide fraction, which is responsible for the stimulation of the immune system, or to the triterpenes, which demonstrate cytotoxic activity against a variety of cancer cells [3], [4], [5]. G. lucidum extract (GLE), containing polysaccharides and triterpenes, was reported to suppress growth and metastatic potential of human MDA-MD-231 breast cancer cells by inhibiting the activity of Akt and transcription factors AP-1 and NF-κB, resulting in the downregulation of expression of cyclin D1 [6], [7], [8]. Moreover, we recently reported that Reishi selectively inhibits SUM-149 IBC cell viability and invasion, while not affecting non-cancerous mammary epithelial (MCF10A) cell viability, making it a potential anti-cancer therapeutic [9].

Deregulation of phosphoinositide 3-kinase (PI3K)/AKT/mammalian target of rapamycin (mTOR) pathway, and mRNA translation from negative feedback responses, is associated with increased transformation and oncogenesis [10]. More than 70% of breast tumors have molecular alterations in at least one component of the pathway [11]. Loss of PTEN, which is a tumor-suppressor gene that inhibits the PI3K/AKT/mTOR pathway, causes the aberrant mTOR pathway activation. Activation of mTOR signaling is involved in some of the cancer hallmarks and contributes to tumor growth, angiogenesis and metastasis, reinforcing the importance of considering mTOR targeting in cancer therapy [12], [13], [14]. mTOR forms two functionally distinct multiprotein complexes, mTORC1 and mTORC2, that control cell growth, proliferation, and survival. mTORC1 effectors are the eukaryotic initiation factor 4E-binding protein 1 (4E-BP1) and the ribosomal protein S6 kinase (p70S6K) [15], [16]. mTORC1 acts on the cap-dependent translation initiation complex known as eIF4F, consisting of cap binding protein eIF4E, RNA helicase eIF4A and molecular scaffold protein eIF4G. Directed by mTORC1, the 4E-BP-eIF4E complex exerts control over cap-dependent translation, assisted by p70S6K, which also stimulates eIF4F translation of specific mRNAs with highly structured 5′UTRs via eIF4B phosphorylation, promoting cell growth, and tumor progression [16]. IBC tissues overexpress the eukaryotic initiation factor 4G (eIF4G), and this effect is usually seen in the absence of any changes in the levels of eIF4E [17]. In addition, in SUM-149 IBC cells, a substantial amount of eIF4G is free and unbound to eIF4E, because IBC cells have a high proportion of their 4E binding protein (4E-BP1) in the hypophosphorylated (activated) state and bound to eIF4E, compared with MCF10A cells that have similar levels of eIF4G and total 4E-BP1 [17]. Overexpression of eIF4G drives greater formation of eIF4F and cap-dependent mRNA translation, and high levels of eIF4G maintain high levels of internal ribosome entry sites (IRES)-dependent (eIF4E-independent) mRNA translation as well, which is used as an alternative mechanism of translation initiation by subset of stress response, and survival mRNAs. Importantly, eIF4G is responsible for the strong homotypic IBC cell interaction that drives formation of tumor emboli (tumor spheroids in vitro) and promotes IBC cell invasion and passive metastasis [17].

The present study was designed to elucidate the anti-tumor effects of Reishi utilizing in vivo and in vitro IBC models focusing on the PI3K/AKT/mTOR pathways and effectors. We tested our hypothesis that Reishi extract acts on mTORC1 and/or downstream effector proteins by using an IBC model that depends on this pathway. Our findings are the first to show that Reishi downregulates the expression of PI3K/AKT/mTOR and also MAPK pathway effector genes and proteins in vitro and in vivo, and it significantly reduces IBC tumor growth and weight. The current results suggest that Reishi is a potential novel chemoprevention and treatment agent for IBC and other malignancies that are mTOR driven.

All animal studies were conducted under approved protocol #11-XVI-01 by the Universidad Central del Caribe School of Medicine, Institutional Animal Care and Use Committee in accordance with the principles and procedures outlined in the NIH Guideline for the Care and Use of Laboratory Animals.

A commercially available extract consisting of Reishi fruiting body and cracked spores, known as ReishiMax GLp™, was purchased from Pharmanex® Inc. (Provo, UT). Details on the preparation of this extract are described in [19]. The extract is available in capsules, where the contents (500 mg) were dissolved in 100% sterile Dimethyl Sulfoxide (DMSO, Sigma Aldrich) at a working stock of 50 mg/mL, then diluted to 0.5 mg/mL with media before use. This concentration was chosen after a thorough review of the literature, and it is the concentration we demonstrate to be effective for anti-IBC effects [9]. For in vivo studies, Reishi extract was dissolved in the vehicle solution of 10% ethanol +90% ultrapure water at a concentration of 28 mg/kg BW.

Female severe combined immunodeficient (SCID) mice (21 d of age) were purchased from Charles River Laboratories International Inc. (Wilmington, MA) and housed under specific pathogen-free conditions. The mice received autoclaved AIN 76-A phytoestrogen-free diet (Tek Global, Harlan Teklad, Madison, WI) and water ad libitum. Cell inoculations were performed as previously described by us [20]. SUM-149 cells (∼1×106) in Matrigel (BD Biosciences, San Jose, CA) were injected into the mammary fat pad under isofluorane inhalation as described in [20], [21]. After tumor establishment (1 week post-inoculation), the animals were randomly divided into control (n = 11) and experimental (n = 11) groups. Mice were gavaged every day with vehicle or 28 mg/kg BW of Reishi for a period of 13 week. Mice were weighed weekly and tumor volume was measured once a week along two major axes using calipers measurements. Tumor volume (mm3) was calculated as follows: π/6 (L)(W)(H). The relative tumor volumes were calculated as the ratio of the average tumor volume on week n divided by the average tumor volume on week one. Tumor weights were obtained at the end of the study. 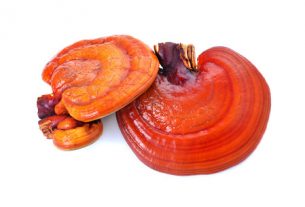